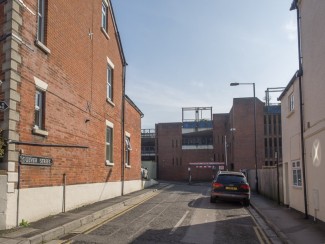 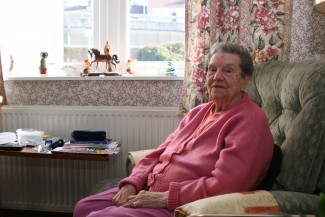 Stand 8. Margery Bodger lived all her life in No.40 Culver Street until it was demolished. (MP3 audio clip)

Culver Street was one of the original mediaeval streets of Salisbury. In the Middle Ages, it was part of Salisbury’s  ‘red light district’. It is recorded that in 1452 the women scandalised the citizenry by neglecting to wear the striped hoods prescribed as their official dress and the City Fathers ordered them out of town.

By the 19th and early 20th centuries, it was a residential street, rather like Guilder Lane, complete with small shops and a pub. By the early 1970s, most of the street was demolished for development associated with the Ring Road – hence today’s dominant feature, the car park.

Margery Bodger, born in 1921, lived all her life in No. 40 Culver Street until it was demolished to make way for the car park. Listen to a childhood memory of her’s  in the audio clip on the right side of this page or  in the MP3 from the Downloads page.

Entrance To The Street

The only original part of Culver Street which survives today is the side entrance to the corner shop at No 68. Milford Street. Here, there was once a row of six small almshouses run by St. Martin’s Church. They accommodated six elderly women who each received a weekly gift of three shillings and sixpence from the Church.

Walk on to the car park and then left round it by the tarmacked footpath.   Go under the archway on your left into the car park of block of flats Nos. 12-18 Culver Street. Walk as far as the ‘No Ball Games Sign’.

View From The Car Park

From here you can see the volume of traffic on the Ring Road, which occupies what was once the west side of Rampart Road. Both the inhabitants of Culver Street and Rampart Road were evicted out of the homes their families had lived in for generations, to make way for the Ring Road.

The ‘Invicta Leather Works occupied most of the space taken up by the houses on the far side of the car park It was dominated by a tall chimney and was a major Salisbury industry.There is more about this at the next Stand.

Go to the end of the street to the junction and turn left into Paynes Hill and view the modern houses on your left which occupy the site of the Invicta Leather Works.  There is little to see here nowadays, but the text accompanying Stand 9 reveals a little of what life was like here before these houses were built.