You are here: Home>Memory Walk>10. The Joiners' Hall and St Ann Street 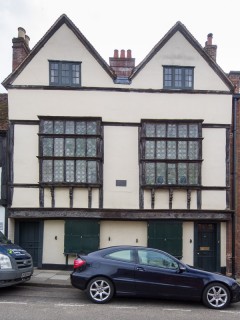 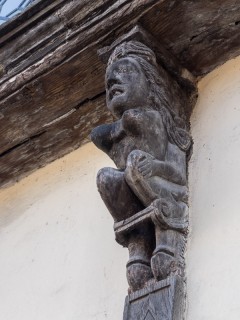 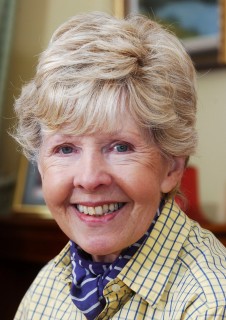 This  Grade 1 listed building is impressive even today. When it was built in the early 17th century, all of its timbering was new, it must have been even more so.  This befitted its civic status, as the guildhall of Salisbury’s Joiners’ Company.  At that time the City had a high reputation for woodworking and furniture making.

Humphrey Beckham did the fine decorative woodwork.  He also provided it with equally fine interior fittings and a beautiful Warden’s Chair. Beckham’s craftsmanship had made him rich, but he appears to have lived frugally to the ripe old age of 83.

Look closely at the six humanoid figures that grace the front of the building.  Instead of the more usual gargoyles or animals, they consist of five unmistakeably male heads, but surmounting five unmistakably female bodies!   The heads are realistic in style and differ from each other sufficiently to suggest that they are carvings of actual characters. The female bodies, on the other hand, are grotesque to the point of near obscenity.

Why did Humphrey do this?  A traditional belief is that he fell out with six of the city Aldermen, or with leading members of the Guild. Did he then insultingly caricature them as women for posterity; an acceptable insult, of course, in the 1600s.

Until the Ring Road cut it off, St Ann Street was the main exit route from Salisbury to the Southampton Road. At the height of the City’s wool trade, in the 15th century, it’s estimated that a third of Southampton’s commerce came to and from Salisbury. After the decline of its trade, the street still retained some of this importance. In the 18th century it was obviously considered a desirable part of town,  as you can see by the number of handsome town houses dating from then and co-existing with equally fine buildings from earlier periods.

Rosemary Squires remembers all the traffic in St Ann Street when it was the main exit route from Salisbury before the Ring Road was built. Listen to the audio clip on the right of this page or on the MP3 file from the Downloads page.

With the Cathedral behind you, walk to the top of the St Ann Street, go through the underpass, under the Ring Road. As you go, notice how short the underpass is reflecting on how narrow the Ring Road is. Pause as you emerge on St Martin’s Church Street. Look at the large red brick buildings towards your right, which are now part of Salisbury College.