You are here: Home>Memory Walk>7. The Milford Street Bridge Mural 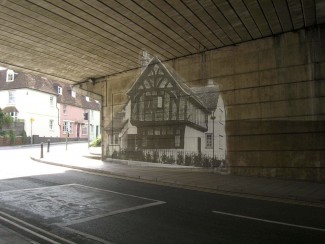 Standing by the information plaques and facing you, is the celebratory Milford Street Bridge Mural painted in 2011.  It represents some of the local characters, buildings and businesses that were here before the Milford Street Bridge and Ring Road were built in the late 1960s and early 1970s. The images were drawn from the memories of people who lived here and who we interviewed for our oral history project.

Phyllis Maple  remembers the mediaeval house at No 88 Milford Street that is depicted in our mural. She says it was the best house in the district. The community were told it was to be taken down brick by brick and to be rebuilt elsewhere. It was destroyed. Listen to the audio clip on the right hand side or the MP3  clip from the Downloads  page.

The idea for the first Mural originated with artist Fred Fieber. Living close to the bridge, he saw its depressing concrete ugliness. He had also been gripped by the story of No. 88 Milford Street, destroyed to make way for the Milford Street Bridge and the Ring Road. This action also destroyed a thriving local community, many shops, businesses, buildings and the lives of many who lived there. So came the idea for a commemorative mural. He shared his vision with Clare Christopher in the nearby Wyndham Arms.

‘When Fred told me he had an idea to paint a mural on the wall of the bridge, I was enthused and inspired.   Making his idea happen meant finding funding, sorting out legalities, building a project team and, most importantly, involving the local people.   From the outset, we wanted local people to feel that they owned the mural, that they had a part in its creation and that it meant something to them.   Through running our oral history project, doing lots of research, getting schoolchildren involved, putting on exhibitions and events I think we have achieved what we set out to do.   And of course Fred has got the murals up there for us all to enjoy!’

‘Standing in front of a 31 x 7 metre blank canvass with a small paint brush was indeed daunting!  After many months of meetings, planning, design and redesign, I had come to the scariest moment.   Once I had scaled up the designs and drawn out in chalk in the wall, the paint (a German architectural paint) began to flow and when Number 88 began to form, confidence and creativity followed.   Comments and encouragement from passers by kept our two-man team going, especially on freezing mornings when painting while wrapped in many layers and wearing gloves.   I think we had only one shout of ‘waste of time’, from a passing taxi driver – public support was 100%.

On completion, after six weeks of painting, the public support and community spirit the project evoked was overwhelming and has resulted in the great pride and satisfaction of a job well done!”

The first mural was declared ‘open’ by Margery Bodger, one of our oldest interviewees, assisted by St Martin’s School pupil Amber Riley.

Walk back down Milford Street and enter Culver Street on your left.