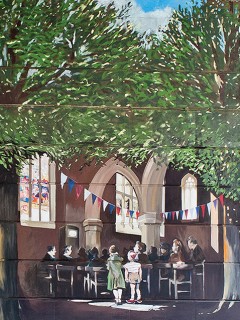 The fourth scene in the Jubilee Mural, showing people watching the Coronation on a television in St. Edmund's Church
Mural by Fred Fieber and Anthony Woodward, photo by Peter Marsh

In 1953 the few people who owned televisions invited friends and neighbours to watch the Coronation.  One such gathering was at St. Edmund’s Church, now Salisbury Arts Centre.

“Being a member of St. Edmund’s Church, people were invited to watch the Coronation on TV.  I had never seen a TV before, and we were all crowded on chairs watching a small brown Bakelite TV set.  I remember it was hard to watch being a wet day and it affected the transmission I suppose.”  Jan Truckle

“the Coronation was a big thing, because I don’t think there’s many people had televisions in the street, then, but they had a big TV screen in the church, so we all  went up to … St. Edmund’s (Church).  St. Edmund’s was the hub of the community in those days. It was very sad when that shut but that was the hub of the community.  Yeah, we had a big television in there and all the whole street went up there.”