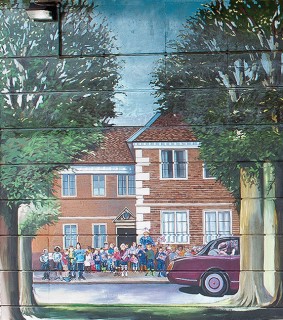 The first scene of the Jubilee Mural showing the Queen's visit to Salisbury in April 2012
Mural by Fred Fieber and Anthony Woodward, photo by Peter Marsh

The first scene in the Jubilee Mural represents the Queen’s visit to Salisbury in April 2012, the year of her Diamond Jubilee.  We have shown her in her car as this is how most people saw her.  We also wanted to show the pink of her hat and clothes, as this is what most people remembered about her visit.

Her Majesty is pictured in the Cathedral Close, and the crowd represents a mixture of Salisbury people.  Two of the children are in St. Martin’s Primary School uniform, to cement the links between the project and the school.  Since the mural was painted the school has changed its uniform, making the mural already a historical document.