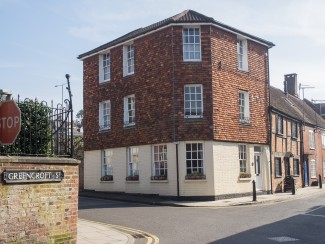 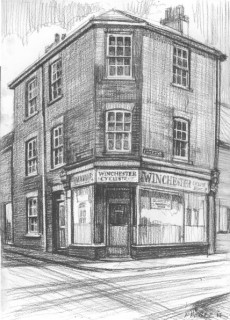 This drawing is of the Cyclists Rest, on the corner of Winchester Street and Guilder Lane - home to Eileen O'Leary as a young girl (see more about Eileen in the mural characters section)
Drawing by Fred Fieber 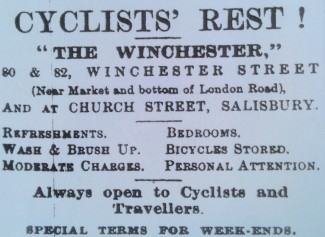 The tall house standing on the corner of Winchester Street and Guilder Lane is now known as Crab Apple Cottage and it is of interest to us for two reasons. The first is that it was the home of Eileen O’Leary who features in the Milford Street Bridge Mural. The second is that it played an important part in local life as the “Cyclists’ Rest”.

Ex-soldier Richard O’Leary and his wife Minnie came to Salisbury in 1901and settled here. They had two children, Eileen and Galbraith, and ran the Cyclists’ Rest offering a wide range of services to the passing traveller – particularly the bicycling traveller.

Their daughter Eileen worked at Lipton’s in Silver Street, where Boots now is.  There she met Neal McNamee, and they married.  Neal enjoyed a successful career with Lipton’s and in 1912 the couple were invited to travel to New York to head up an important part of the company’s operations. They set sail on the Titanic on its ill-fated maiden voyage.

Eileen’s body was recovered, but buried at sea.  Neal’s was never found.

You can read more of Eileen’s story on her own page and more about the Cyclists’ Rest and life in the surrounding area on the Winchester Street section of the Memory Walk.