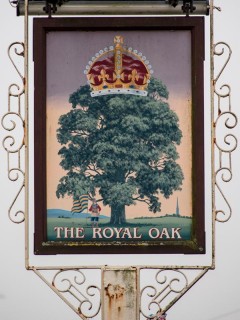 The 2013 sign at the Royal Oak pub in Devizes Road

There was a pub in Culver Street called the Royal Oak.  Most of Culver Street has disappeared now, underneath the multi-storey car park.

We have this interview with Margy Bodger, born in 1921, in which she talks about the Royal Oak:

And do you remember a pub called The Crystal Fountain?

“Yeah. We used to go there quite often. And the Jug and Bottle. [Laughs] And there used to be a pub in Culver Street, too.”

What was that called?

Yes. So, the board outside that pub is the original.

From the pub in Culver Street?

Did you go into the Royal Oak?

“Yeah! I used to go over there for our Gran. My grandmother. With a jug.”

What did you get for her?

“Half of old mild. In the Jug and Bottle. Used to tap the door. The little window. Down the passage. There was a pub in there. Go through the door. There was a pub through there. Down the passage a bit further. And it came in contact with a sort of the bar, the back of the bar, you know. Tapped the little window. Up would come the window and he’d say ‘Yeah? Oh, hello Mag!’ You know. ‘What you want? Oh, I know. Come on, let’s have your jug.’ [Laughs] Yeah.”

Whereabouts was the pub?

So quite close to where your house used to be?

The photo is of the present pub sign at the Royal Oak in Devizes Road. We don’t know whether this is the original sign, or the original design. It has some Salisbury touches in the blue-and-gold city flag and the slender spire in the distance which often symbolises Salisbury cathedral.