You are here: Home>Project map>A History of Invicta Leather Works

A History of Invicta Leather Works 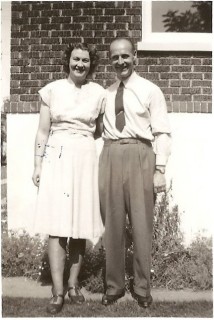 Ernst Kolk was one of the workers brought to the United Kingdom in the 1930s, taking the place of someone who had dropped out. After being interned in Canada before the war, he returned to Salisbury and married Joyce Evans before emigrating to the United States in the summer of 1947.
Picture by kind permission of the Jacob family 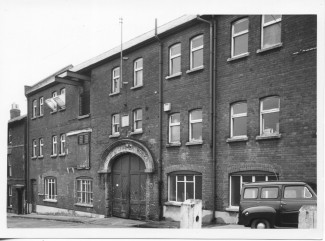 Margary Bodger lived in Paynes Hill and worked at Invicta as a dresser. She describes the processes in some detail.

Ken Edwards describes how his father took skins, tanned at the Invicta Leather Works, to Northampton where they were made into shoes and handbags.

It is thought that Invicta was founded by Mr Woodlands in 1824; the works then being next to the Woolpack in Endless Street and employing only three to four men. The Ware family acquired the business in 1862 and, by the turn of the century, there was a workforce of over one hundred producing ‘all classes of English and foreign leather’ for machine bands, leggings, saddles and tack as well as boots and shoes.

In 1901, however, the Invicta premises in Endless Street were destroyed by fire and subsequently abandoned in favour of a specially built factory on a strip of land between Culver Street and Rampart Road with an arched entrance in Paynes Hill. Opening in 1902, it produced leather for thousands of army boots during the First World War yet, according to one source, was closed in 1923; later being taken over by a group of Germans from Cologne.

Another source, however, gives a different version of events, Invicta changing hands between 1935 and 1936 upon the retirement of Mr H. G. Ware and becoming Colonia Ltd. After this date, some workers were brought over from Germany and the factory began to specialise in the tanning of exotic skins, including those from snakes, crocodiles, eels and elephants.

In 1939, the owners fled back to Germany, the Government using the Enemy Aliens Act to seize and close the factory. Those German workers, who had not followed their employers, were interned, one named Ernst Kolk being sent to Canada for the duration. Having made friends through a cycling club, Ernst returned to Salisbury after the war and married a local girl; both emigrating to the United States in the summer of 1947.

Invicta/Colonia was sold in 1945 and, by 1956, employed about eighty people; the works again processing imported skins for the shoe and fancy good trades. For some reason, however, the chimney began to emit brown smuts, these burning holes in washing hung on garden lines. Being a source of employment, residents tolerated the unpleasant smells when the wind was blowing in a certain direction, the noise of night working during busy periods and even skins floating under the floorboards but these smuts really angered them. Letters were written, visits made to the Council and interviews arranged on Southern Television before the management finally addressed the problem; one measure being to raise the height of the offending chimney.

In 1969, the Council acquired all land and buildings in the area for the development of a dual carriageway; a Compulsory Purchase Order being used to force the owners to sell. The premises were demolished a year later and the rubble used as hardcore for the new road; the ghost of Invicta lingering beneath the wheels of vehicles travelling along Churchill Way!

In the 1950s, Invicta employed eighty workers. Were you one of them?