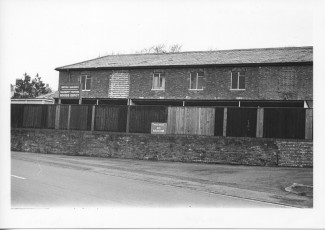 The Milford Goods Depot in 1966.
With kind permission of Salisbury and South Wiltshire Museum © Salisbury Museum 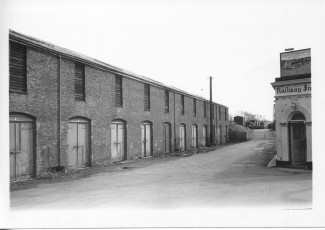 The Blakey Road coal bunkers, opposite the Dust Hole pub, where the local coal merchants unloaded and stored coal from the yard, creating loads of dust - hence the 'Dust Hole' pub name. The last 2 were demolished c. 2012-13.
With kind permission of Salisbury and South Wiltshire Museum © Salisbury Museum 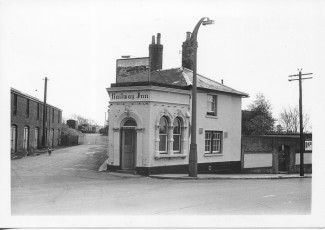 The Railway Inn / The Dusthole, in 1966.
With kind permission of Salisbury and South Wiltshire Museum © Salisbury Museum

When the railway first came to Salisbury the station was at Milford, on the south-eastern side of the city,  serving both passengers and goods.  It wasn’t long before the passenger services moved across the city to the site of the present station.  The goods yard was large and busy and played a major part in the life of the area for more than 100 years.  It closed in 1967 and there are very few clues left now to hint at what it used to be.

The first railway company to come to Salisbury was the London & South Western Railway Company (LSWR) who built a branch from their London to Southampton route.  The Salisbury branch left the main line at Eastleigh (then known as Bishopstoke) and the line came through Chandler’s Ford and Romsey to a terminus in Milford.

The first train arrived on 27th. January 1847, carrying 100 tons of coal as a gift to the poor people of the city.  Contemporary reports say it was greeted by a large and enthusiastic crowd – it seems that 150 years ago the good folk of Salisbury were just as keen on a freebie as we are today!

Passenger services started soon after, the first arriving on 1st. May 1847.  This was a period of rapid development for the railways and in May 1857 a more direct route to London via Andover opened, with the line coming down the Bourne valley.  This cut nearly 15 miles off the journey, but it was inconvenient because it required trains to reverse to get into the station.  In 1859 an extension was completed from the Andover route to join the line from Yeovil at their station in Fisherton, on the western side of the city where the current Salisbury station stands.  All passenger services, including those from Eastleigh and Southampton, were diverted to the new station on 2nd. May 1859.

The Milford yard remained in use as a centre for goods traffic, and had a big impact on the area.  The main goods traffic was bringing coal in, and sending livestock from the market out.  The yard finally closed on 21st. August 1967 after 120 years of use.

The goods yard was large, extending westwards from the current railway line almost to Fowler’s Hill. You can still see where the chalky hill was dug away to provide space for the sidings.  We have a description of life around the Milford Goods Yard on Stand 14 of our Memory Walk .

There is little to see in the area now to reveal its railway heritage. The modern Salisbury-Southampton railway line goes past behind a fence, and the site is covered in anonymous office and light industrial buldings. The only clues are a pub (which has its own page, see below), a stretch of old wall behind it which might have been part of the railway site, a track used by Network Rail to access the railway line, and the names of two sets of new flats – “The Sleepers” and “The Sidings”.

The pub that was built for the railway outlasted the railway itself.  It is still there, and is a lively “local”. It was originally called the Railway Inn but acquired the nickname of “The Dust Hole”. It has its own page which explains the story – The Pub With Two Names .

You can see how the area looks now, and compare with our old photos, in the Milford Goods Yard Photo Gallery page.