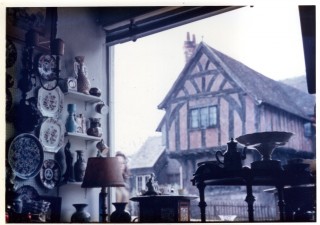 In 1479 a tenement next to the city rampart and Milford Bars was recorded as belonging to a tailor named William Marchy, and it is likely that the house on this spot which was demolished in 1972 was built by him.

It had undergone some changes since mediaeval times, notably the addition of a panel in the upper storey, probably done in 1914, when the adjoining buildings were demolished.  However, it retained many original features externally including most of its timbers and an original brick chimney stack.  It also had what was probably the last surviving mediaeval ridge tile finial in situ in Salisbury –  thought to have been made locally, in the Laverstock kilns. Inside there was a stone chimney piece and moulded fireplace and some fine beams on the ground floor, and a smaller fireplace on the first floor.

1972 was not the first time the house had been in danger of demolition.  The South Wilts Gazette of April 11 1913 reports the ‘happy decision’ by the promoters of the St Martin’s Men’s Bible Class, who had bought the site to build new premises, to preserve the house, with the help of subscribers from the town.  The accompanying picture shows the house in its pre-1914 form, without the extra gable.

Adjoining number 88 and up a path was a hall, St Martins or Milford Hall. The hall was used for all sorts of community events – dancing lessons, beetle drives, meetings, brownies, youth clubs, wedding receptions and the like:

Mrs M Tucker describes the buildings: “It was a wooden hall and it had a garden in front of it, and there was a garden to the side which..was a nice little sitting area. Sideways on to the hall was a …cottage and I think the caretaker lived in the cottage. The hall faced out to Milford Street, but the cottage was sideways onto it….All sorts of things went on there….they had the best Christmas bazar in the district…and then they would let it out – my daughter went there for ballet classes.”

” Aubrey Neate’s wife, and her sisters danced there during the second world war years, before they were married “..they decided they would tell their mother that they would have to go in early, and off they went….instead of going to the army hut to start work…they used to go up to St Martins Hall…and it was a dance hall” 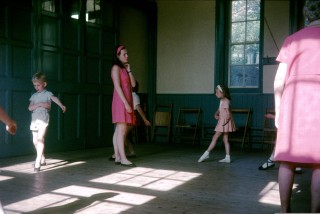 “I do remember going in there because it was used as more of a community centre as we call them today. I remember even as a child loving that building, there was just something about it, and the tragedy of when it was taken down. And I thought yes OK it’s got to come down because of the ring road but please put it somewhere else….” (Naomi Parkes)

It was also home to the Swan School from 1953 to 1964.  Miss Swanton, the Headmistress wrote that they ‘moved into St Martin’s Hall, Milford Street, recently vacated by the Church School. Four large rooms, each with folding doors to make a large Hall’. 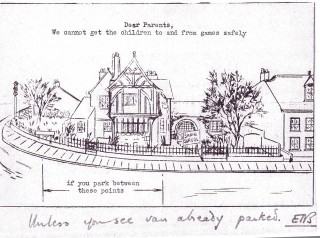 A note from Headmistress Ms Swanton to parents regarding parking at Swan School, 88 Milford Street

Roger Stephens remembers attending the school: “And I can remember being at school, this was ..(the) …Swan School, and the Swan School was originally in Crane Street. My remembrances of the building are pretty hazy really, ….. but, I can remember going down at lunchtime in crocodile, down to the Gaumont, which is now the Odeon, for lunch, and then having to go back and I think this is every day as far as I can remember”.

What happened to number 88?

Local people were dismayed to see the house and hall purchased for demolition, but gained some solace when they heard that it was going to be re-erected at Lockeridge, near Marlborough, on an estate owned by Lord Kennet. Although this was what most people believed, and it has been repeated time and again in books, in fact this never happened.

Tenacious researcher Barbara Bayfield was determined to find out where the remains of no.88 ended up. In a stunning piece of lateral thinking she phoned the village pub in Lockeridge! Through information she gained there, she got in touch with film director Stephen Weeks, who had purchased the house. It appears that his intention was to use the timbers to renovate his castle – Penhow Castle in Wales – Lockeridge being a temporary storage place as he was friends with Lord Kennet.

Stephen Weeks finishes the story: “The building went to a site near Lockeridge. That’s the good news. Unfortunately, it was delivered simply scraped up by a bulldozer and was not at all salvageable. That included a mediaeval stone fireplace too. It was a great disappointment – and at that time I was not equipped to deal properly with the removal of buildings and to trying to get any care from demolition contractors. Lord Kennet (just died – Wayland Young), who lived in Lockeridge, found me a place to have the building delivered prior to (I hoped) sorting for re-use. This must have happened around 1972 or 1973. So the building never went to Wales.” (e-mail from Stephen Weeks, June 2009).

A sad end to a magnificent building. 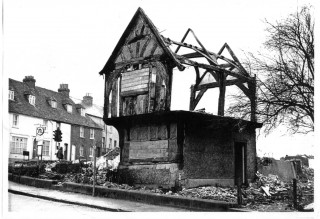