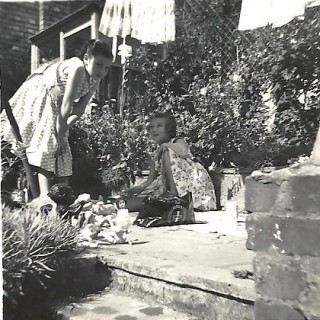 In the 1920s, children could play outside their homes in Rampart Road but, with the increase in traffic, it became too dangerous to do so. In the 1950s, children either played in gardens or went to the designated play areas, this photograph showing the garden of Number 16.
Picture by kind permission of the Jacob family 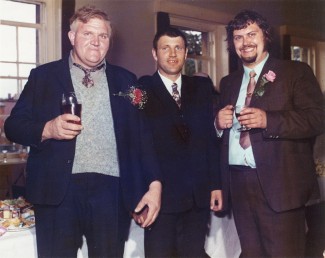 Percy Andrews (pictured at his nephew's wedding in 1972) lived with his parents, sister and nephew in one of the houses near Percy Churchfields Dairy. As a 'cow walloper', he became something of a celebrity and is featured on the mural.
Photo by kind permission of Tony Baker

An increase in motor traffic led to long queues and gridlocks during busy periods; Rita Jacob remembering that residents often had to climb over or squeeze between vehicle bumpers to cross Rampart Road.

Michael Winterman describes the occasion when a cow entered Foster's shop, this scene being portrayed on the Milford Bridge mural.

Rampart Road linked routes to London, Southampton and the Dorset coast yet, at the beginning of the century, children were able to play games such as Birds, Butterflies and Beasts across it; most vehicles then being horse-drawn. Moreover, the road continued to be relatively safe until after the First World War, a young Arthur Maidment walking unaccompanied from St. Martin’s Infant School to St. Martin’s Men’s Club where his mother was attending a Mothers Union meeting.

By 1935, however, the increase in motor traffic necessitated the installation of traffic lights along the London Road to ease the flow and improve safety. This action may have had the desired effect for a few years but, during the 1950s and 1960s, there were often long queues and gridlocks; residents wishing to cross Rampart Road having to squeeze or climb over the bumpers of stationary cars. Moreover, vehicles sometimes jumped the lights; a fatal accident occurring in June 1940 when a car did so and collided with a bus crossing the junction from Milford Hill.

During the Second World War, convoys of military vehicles rumbled along the road; causing the bay windows of some properties to subside. Also, after one of the Levers’ sons had a fatal encounter with an American army lorry, parental attitudes to playing outside began to change; the children of subsequent decades being confined to their gardens or designated play areas such as the Greencroft and Riverside Gardens. Similarly, until the Council provided a crossing patrol at the bottom of Rampart Road, young children were either escorted all the way to school or crossed over the most dangerous roads; this happening four times a day if they came home to dinner.

Cars, lorries and the Number 37 bus from Southampton were not the only hazards faced by residents wishing to cross Rampart Road; it being the practice to drive cattle along the roads between Milford Goods Station and the market. With the cow walloper following behind, the animals could break from a trot into a full gallop; it also not being unusual for one to stray into a front garden and peer through the window! According to Arthur Maidment‘s biography I Remember, such droving diminished during the 1930s; motor vehicles being able to transport cattle from door-to-door. Yet, Percy (Porky) Andrews, dressed in a long brown coat and flapping gum boots, could still be seen swinging a cane and hollering well into the 1950s!