You are here: Home>People>Home and Family Life>Rampart Road : The People 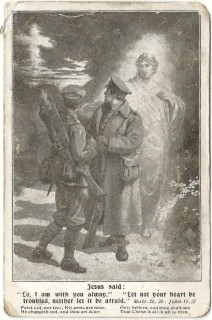 This postcard sent in September 1917 captures the sombre mood of the nation as the casualties mounted.
Postcard from the Jacob family's collection 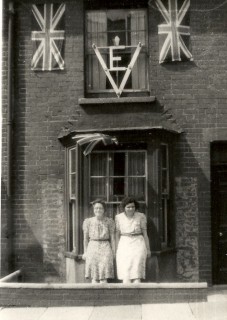 This photograph shows Rose Casey and Nora Jacob standing in front of Number 16 Rampart Road when it was decorated for the VE Day celebrations. In 1953 these flags were brought out again for the coronation of Elizabeth ll; the VE being replaced by an illuminated picture of the new Queen.
Picture by kind permission of the Jacob family 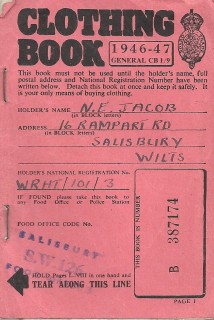 Although the war was over, the shortages continued into the next decade, even children born in 1952 being issued with ration books. This clothing ration book is one of two issued to Nora Jacob between 1946 and 1948.
Reproduced by kind permission of the Jacob family

Phyllis Maple recalls that street lighting was installed just before the Blackout Regulations were enforced.

Jean Maroney remembers standing in Milford Hill and seeing a glow in the sky when Southampton was heavily bombed. She also recalls rationing, particularly the scarcity of sweets and clothes.

Marion Tucker speaks about the amount of traffic that passed through the area before Churchill Way was built.

In his book I Remember Arthur Maidment alludes to the poverty and community spirit that existed in the area at the beginning of the twentieth century; his own home being one street away, in Culver Street:-

‘Generally speaking there was a shortage of money, holidays were almost unknown, but the street had a community spirit seldom found today.’

The Impact of the First World War

During the First World War, fear of air raids, the introduction of a blackout and severe food shortages made life even more difficult; particularly in the winter of 1917/1918:-

‘When food was dreadfully short, a communal Soup Kitchen was set up in the Lear Memorial Rooms in Gigant Street. We went along with basins and were served from a tap which was at the end of a pipe coming through the wall into the street where trestle tables had been erected.’

Moreover, like Herbert Maple, men returning from military service often found themselves without regular employment, a situation repeated in the 1930s when, each day, the queue of jobless stretched from the Labour Exchange at the end of Catherine Street to the Milford Street corner.

The area also had it’s share of casualties at least eight of the men killed having links with Rampart Road; Frederick Massey, Sidney Massey and Charles Munday living at Number 38. Three Massey brothers and Sydney Pitman from Number 39  all served in the Wiltshire Regiment and were ex-members of St. Martin’s Church Lads Brigade; perhaps joining up in a ‘pals’ initiative since the historian, Lyn Macdonald, often mentions a Church Lads Brigade in her history of the Somme.

The first Salisbury Directory published after First World War shows that, in 1922, the Rampart Road population was as diverse as the housing; ranging from gardeners, labourers and boot makers to clerks, teachers and a beadle! By the end of the Second World War, this social gap had almost closed, most occupants working in skilled trades or the public services. Yet, as late as 1969, few owned the houses they lived in; the majority renting from private landlords who usually owned several properties in the road.

Generally, the families who lived in Rampart Road in 1945 were not those living there in 1922; the population more or less changing completely within a period of twenty three years. Conversely, from 1945 to 1969, there was little movement; the community becoming relatively static and close knit. Everyone knew everybody else who lived on their side of the road as well as most of those living opposite; children feeling safe enough to knock on any door when in trouble. The families living beyond Milford Street, however, remained comparative strangers unless they had relatives living in the lower part; probably feeling more affinity with neighbours in Winchester Terrace than those who merely shared their postal address.

The Gates was one family listed in the 1922 directory who were still living in Rampart Road, at Number 6, during the 1950s. In February 1931, Mr and Mrs Gates who already had six daughters, became local celebrities when Pamela, Peggy and Patricia were the first triplets to be born at Salisbury Infirmary. The triplets who were later followed by Ronald, the only son, went to Saint Martin’s and Saint Edmund’s schools before working in Boots and marrying husbands who had done their National Service in Wiltshire. On 17 February 2011, although no longer living in Salisbury, they once again featured in the local paper having just celebrated their eightieth birthdays.

The Impact of the Second World War

Although some bombs fell during the Second World War, Salisbury escaped the destruction wrought on other cathedral cities; it being a local belief that the spire was an important navigational point for German pilots. Nor did the area experience the dire food shortages of the First World War or the terrible casualties; many of the men living in Rampart Road being the wrong age for conscription or in reserved occupations. Some families, however, took in evacuees from Portsmouth while others were billeted in Beckingsdale House opposite Lannings.

On VE day, Rampart Road was decked in flags; Number 16 also displaying a large V and E made of wood and light bulbs. The residents, some in fancy dress, gathered round tables set up on the pavement; the road being part of an important military route, US By Pass 2. As they tucked into their paste sandwiches and jelly, however, they were blissfully unaware of the damage being done by the rumbling heavy vehicles; some bay windows subsiding in later years with little but air under the floorboards.

Eight years later, the same flags were brought out to celebrate the coronation of; the VE being replaced by an illuminated picture of Queen Elizabeth. Again, the residents could not hold a street party in Rampart Road itself as its closure would have caused too much disruption to traffic. Some events took place in St. Martin’s Church Street with the tea being eaten in the gardens of the Tollgate Inn. Sadly, by the time Salisbury celebrated the Silver Jubilee in 1977, one side of Rampart Road was no more and, families scattered all over the city.

Before the bulldozers rolled in, however, an event occurred that was so shocking that it was probably the worst in Rampart Road’s history. By 1967, some residents had already moved out, the houses being boarded up as they did so. For some reason, this did not happen when Number 14 was vacated, a family from some distance away moving in; almost on a random whim. Although seeming pleasant to outsiders, rows between the husband, wife and daughter became increasingly frequent and violent, culminating, one evening, in the death of the wife. Once details of what went on in Number 14 became known, people did not even like passing the property; its eventual fate perhaps being fortuitous.