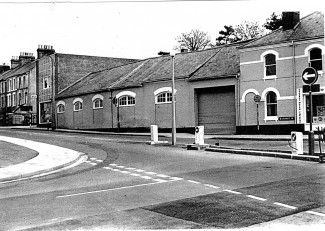 During the 1950s, the New Forest Laundry occupied the large site that once was Armitages. Although unaffected by the construction of Churchill Way, the premises were demolished as part of a new housing development.
Picture with kind permission of Salisbury and South Wiltshire Museum © Salisbury Museum

Geraldine Symons in her book Children in the Close mentions a basement house in Rampart Road believed to be haunted :-

One of the basement houses on the right was haunted. (What by we didn’t know.) That’s why it was empty. No one would live there. We could only guess at the horrifying happenings that the blank, dirty windows had once concealed, at what they might be hiding now. Lifting one’s eyes, one looked with a crawling spine for a dim white face, imagined a cobwebbed wedding cake and an old Dickensian bride.

This house must have been one in the block of three-story properties which stood next to the New Forest Laundry, Arthur Maidment in I Remember placing it ‘some sixty yards’  from Armitages closed down ironworks. By the time the latter was writing, however, the ‘spirit’ had become a soldier killed in the First World War and the house was supposed to have been empty for fifteen years!

I lived opposite these houses between 1948 and 1969, for many years knowing the occupants. Yet, I cannot remember anyone mentioning a ghost, the main concern being flooded basements during heavy rain! Nor is there any reference to one in Haunted Salisbury , a recent book written by Frogg Moody and Richard Nash.

Do you remember a story about a haunted house in Rampart Road where the modern dwellings now stand? Or was it a myth that was only prevalent at the beginning of the twentieth century?