As late as 1800, most of Salisbury was still contained within its mediaeval limits, there being little space available for new building. During the nineteenth century, however, the need for housing led to development outside the boundaries; a number of smaller, terraced dwellings being built, including those in Rampart Road.

The foundations of Rampart Road were laid along the line of the old city ditches; ending near the top of Winchester Street where one of the city gates once stood. The work started in 1895 and, by the following year, was sufficiently complete to feature on a new city map. The Invicta Leather Works, which towered over some gardens, was not part of the original development but moved to Paynes Hill in 1902 following a fire at it’s premises in Endless Street.

By 1896, the building work on the city ditches was sufficiently advanced to feature on this map.

The terrace houses, described by Geraldine Symons in Children in the Close as ‘drab villas’, were, in fact, an eclectic mix; varying in size, style and level. Most of those on the Milford side can still be seen today; the exception being four three-story properties now replaced by more modern dwellings. Each of these had an entrance on the first floor accessed by a flight of steps; the ground floor below forming a basement. At the beginning of the century, one was believed to be haunted; Geraldine Symons writing:-

One of the basement houses on the right was haunted. (What by we didn’t know).

That’s why it was empty. No one would live  there. We could only guess at the

horrifying happenings that the blank, dirty windows had once concealed, at what

they might be hiding now. Lifting one’s eyes, one looked with a crawling spine

for a dim white face, imagined a cobwebbed wedding cake and an old Dickensian

If this was a reference to the house opposite Numbers 16 and 18, a tendency to flood may have been a more rational explanation; later occupants often having to ‘bale out’ the ground floor whenever there was heavy rain!

Some of the houses on the demolished side were on a lower level, having front doors more than thirty centimetres below the road. They also had smaller amounts of land at the front, a number at the Milford Street end having nothing more than a stone step separating them from the pavement. Moreover, the height of the their rear gardens varied dramatically; those of Numbers 10 to 20 being just below the back bedroom windows and reached by climbing eight steep brick steps at the end of the concrete yard. 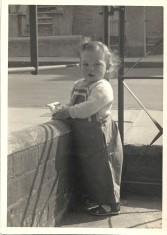 This photograph, taken outside 16 Rampart Road, shows a considerable drop below pavement level. Yet, the people living three doors away, in number 22. had to step up to their entrance!
Picture by kind permission of the Jacob family

As on the opposite side, the largest properties were at the St. Ann Street end; those with land at the front having bay windows on the ground floor. All had hallways leading to sitting rooms, dining rooms and stairs; unlike the houses opposite Percy Churchfield’s Dairy where front doors opened straight into the main living space with only a scullery beyond. Few on either side had bathrooms before the 1960s; it being necessary to sacrifice a coal house or back bedroom in order to build one. Nevertheless, dwellings without indoor facilities had a toilet in close proximity to the back door instead of in a shared block some distance away; this being a norm in some poorer areas.

During the construction of Churchill Way, all the buildings along one side of Rampart Road were demolished; including the Invicta Leather Works which stood behind houses at the St. Anne Street end.
Picture by kind permission of the Salisbury Journal