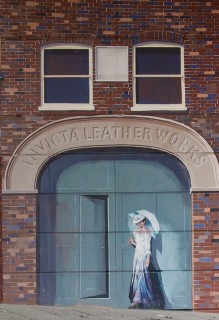 The
Mural by Fred Fieber and Anthony Woodward, photo by John Palmer

The mural depicts the front entrance arch which was on Payne’s Hill.  The factory provided local employment for nearly 70 years until 1969 when it was subject to a compulsory purchase order.  It was demolished a year later, the rubble used as hard core for the new ring road.