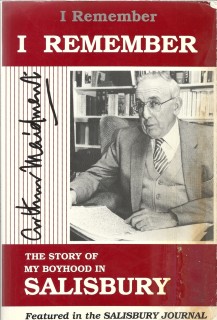 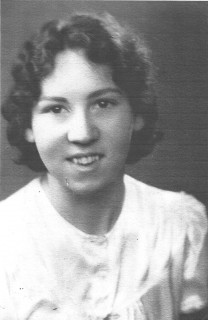 This photograph of Phyllis Maple was taken when she was twenty-one years of age.
Photograph by kind permission of the Maple family

The history of St. Martin’s Primary School is complex as the latter is an amalgamation of schools founded during the nineteenth century. One of these schools was the George Herbert School in Milford Street, part of it becoming St. Martin’s Junior School for Girls in 1930.

Although the statutory entry age remained five years, by 1917 St. Martin’s Infant Department was taking much younger children; presumably because of the number of women involved in war work. Arthur Maidment, who lived in Culver Street, started at the school just before his third birthday, his autobiography ‘I Remember’ containing a description of the building and playgrounds:

‘The school had a very long room, which was divided

by sliding screens built of wood with obscured glass

windows at the top.To the end of this room was the

toddlers’ classroom which was unusual for it had a

well running down the centre and to left and

right were three tiers rising on each side. At the

far end of this room were double doors leading to

a lobby which in turn had doors to the playground.

This had buttressed brick wall on three sides,

dividing it from the old churchyard on the left, the

‘big school’ to the right and allotments at the bottom.’

Sitting in a tiny carver chair behind a matching desk, Arthur learned to write using a sand tray, a slate and pieces of lino printed with red lines, a large class abacus being used for counting. It was one of his first reading books, however, that made a lasting impression:

‘It was a real shocker and used in schools for

it had lurid illustrations of a very tall man

was a pair of giant scissors, open at the ready

to cut off the thumb of any child he saw sucking it.’

In another part of his book, Arthur mentions the terrible food shortages which were experienced during the First World War, it becoming necessary to set up a soup kitchen in Gigant Street. Also, as about four hundred and sixty Salisbury men were killed in the conflict, there were children in St. Martin’s and George Herbert School who had lost close relatives, two of Arthur’s classmates losing fathers. Nor did the suffering end with the Armistice as many of the men who returned home were physically and mentally scarred; there also being a number who were unable to find paid employment. The military funeral of Frank Cox’s father, some months after the war ended, was witnessed by children returning to St. Martin’s after lunch, Arthur remarking:

‘We were all devastated, for although having two classmates,

whose fathers had been killed during the war, this was the

first time that the death of a parent had come so close.’

Peace celebrations were held in July 1919, children from St. Martin’s Infant Department beating drums as they marched through the streets to Dr. Bourne’s field for tea. The older pupils participated in a pageant of Salisbury’s history, a parade ending in Victoria Park where tableaux were performed. These depicted the major events in the city’s past, St. Martin’s tableau featuring the building of the cathedral. The school’s deputy head, Mr. Windust, was Father Time, linking the various scenes with a sweep of his scythe,

By the time Arthur Maidment left the Infant Department in 1922, girls over the age of seven were being transferred to George Herbert School; older boys from the latter coming to St. Martin’s. Until 1926, the schools continued to take children up to the age of fourteen, St. Martin’s Boys’ School having seven classes or ‘standards’; each taught by one teacher and overseen by the Headmaster, Mr. Russ. One of the teachers, Sammy Edwards, later became Head of the new Junior School, another, Ralph Shergold, also finishing his teaching career ‘up the hill’.

Although life in the boy’s school was not as terrifying as the stories told, the move from the Infant Department was something of a culture shock. Pupils, now addressed by surname rather than Christian name, soon learnt that disobedience and transgression could result in caning; Jack Truckle receiving a whack from a flat ruler on his first day. Mr. Russ regarded lateness and grubby hands as particular anathemas, Arthur describing the Headmaster’s regular patrols:

‘ After dealing with latecomers … he would sweep into the classroom

and say “Hands show”…If they were grubby, you were told to put

your hand out and you had a cut with a cane, a punishment which

you quickly learned to be early and clean.’

In the early 1920s, the curriculum became less restrictive, a range of sporting activities becoming available. Like most schools, however, St. Martin’s continued to provide pupils with a thorough grounding in Literacy and Numeracy, writing with a dip pen and ink being a new skill that had to be mastered in Standard One. Also, much was still learnt by rote, the following being one of the ‘chants’ recited in Arithmetic lessons:

Although, after 1926, boys over the age of eleven were meant to transfer to St. Thomas’s, there seems to have been a transition phrase as, in that year, Arthur Maidment had the option of remaining in St. Martin’s until leaving age. Moreover, having spent two happy years in Ralph Shergold’s class, this was his choice until staff changes and a clout from Sammy Edwards convinced him that a grammar school scholarship was preferable:

‘At the end of the morning, my mind was made up, I just could

not countenance Sammy for three more years, so ran home,

blurted out to Mum that, yes, I did want to take the scholarship

exam. Neither parent asked what had brought about this sudden

change of heart. I told no-one and was quite proud that Sammy

had not brought one tear.’

After securing a scholarship place at Bishop Wordsworth, Arthur wondered what would have happened if Sammy Edwards had not tried to ‘knock off’  his head; his parents allowing him to decide his own future. In many homes, however, it was the family’s financial situation that determined education after the age of eleven; many children, like Phyllis Maple, being denied the chance of fulfilling their ambitions:

but my mum, said that because men have to earn a living all their

Although Arthur Maidment’s autobiography contains several chapters about St. Martin’s Infant Department and Boy School, we know very little about the George Herbert schools during this period. We would be grateful for any information about these; George Herbert’s Girls’ School becoming St. Martin’s Junior Girl School in 1930.