You are here: Home>Places>Schools>The History Of St. Martin's Primary School 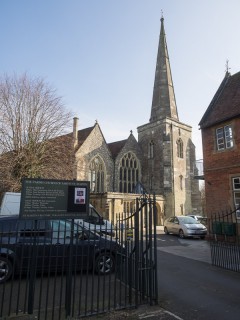 This picture shows St. Martin's Church and the entrance to the churchyard where cars are now allowed to park. The corner of St. Martin's Infant School can be seen on the right.
Photo John Palmer 2014

The 1870 Elementary Education Act, sometimes known as the Foster Act, was the first of a number of parliamentary acts passed between 1870 and 1893 in order to establish the compulsory education of children between the ages of five and thirteen. Many schools were founded during this period but St. Martin’s Primary School predates these by more than fifty years, being one of Bell’s National Schools and opening on 4 March 1811.

The foundations of St. Martin’s Primary School were laid many miles away in India where Dr. Bell, one time Rector of Swanage, was in charge of a Madras orphanage. For, while working there, Dr. Bell developed a monitorial system of education that enabled one member of staff to supervise a whole school; older pupils being used to teach younger ones. This system was later adopted by the National Society for Promoting the Education of the Poor in the Principles of the Established Church in England and Wales, a voluntary body that was responsible for setting up schools in various areas, including St. Martin’s in Salisbury.

Before the Bell National School opened in 1811, the city had to raise £630 and purchase a suitable building, the one chosen being a former malt house, near St. Martin’s church, where French prisoners had been kept during the Napoleonic Wars. Nor was the education entirely free as pupils were charged a penny a week for books and slates. Clean faces, hands and clothes were also mandatory requirements and the only acceptable excuse for absence was sickness, children as young as five being expected to attend all morning and afternoon sessions, including those on Sunday.

Bell’s system of education was still being used in St. Martin’s as late as 1859, approximately four hundred children being taught by two trained staff and a number of pupil teachers. By the time education became compulsory, the number of pupils had risen to 621, two new classrooms being added to the school in 1890.

In 1872, a ‘Ragged School’ or ‘Free School’  had been opened in Milford Street, some families being unable to afford the weekly penny or comply with the stringent regulations regarding regular attendance. As the demand for school places grew, another infant department was built in Gigant Street, this being named the George Herbert School after Bemerton’s cleric and poet. Infants in the Free School were transferred to the latter and, in 1900, the two schools became one. Twenty years later, a partial amalgamation with St. Martin’s was also to take place, this affecting the older pupils in both schools.

After leaving the infant departments of St. Martin’s and George Herbert, male and female pupils were taught separately, this being common practice at the time. From 1920, however, the older children were accommodated in separate buildings; St. Martin’s taking all the boys and George Herbert, all the girls. For several more years, it was still possible for pupils to complete their education in the schools they had entered as infants but, in 1926, both schools ceased taking pupils over the age of eleven. These children now transferred to St. Edmund’s Girl’s School or St. Thomas’s Boys School if they did not obtain a grammar school place.

In 1930, there were considerable alterations to the buildings housing St. Martin’s and George Herbert, the girl’s school re-opening as St. Martin’s Junior Girls School when the premises were re-dedicated on 8 May. The George Herbert infant department continued to take children until its closure in 1938, at the outbreak of the Second World War, the combined schools consisting of three elements:

Under the 1944 Education Act, the two schools were granted Aided status and, after the girls’ school was seriously damaged by fire in November 1945, money from the Government and the Diocese enabled a new junior school to be built at the top of Fowler’s Hill.

St. Martin’s C.E. Junior Mixed School cost £51,786 to build and was first occupied in January 1952, the 285 boys and girls being taught by seven teachers in seven classrooms. The infant children remained in the old school for another fifty years, finally moving up the hill in September 2003 and becoming part of St. Martin’s Primary School. The latter, having metamorphosed from the Bell School established in 1811, celebrated its Bicentenary !

Much of the information in this post comes from St. Martin’s Bicentenary Publication; the latter containing acomprehensive history of the school and a description of present school life.