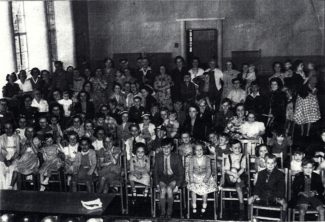 This is a picture of an event held at the school during the 1950s. At the back of the hall, the door to the foyer is open; the flower arrangement on the polished table being just visible. The closed doors on the left led into the dining room.
Taken from a photograph in Robin Safe's possession. 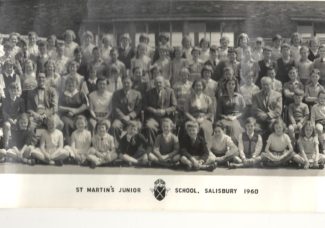 My sister became a pupil at the Junior School in September 1959 when Mr Walker succeeded Mr Edwards as Head; this photograph being taken about nine months later. The part of the school building in the background contained the dining hall; the main entrance and office being to the left and visible in the original.
Part of the 1960 school photograph belonging to the Jacob family 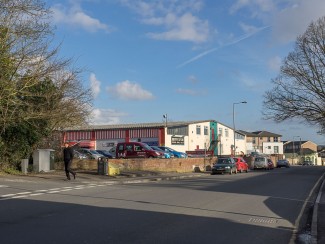 It was near this spot that Arthur Charlton, was tragically killed when he slipped under the wheels of the slow moving lorry that was taking him back to work. Employed at the Milford Goods Station, he must have been only fourteen or fifteen years old at the time, having left the boys' school the previous Easter. Arthur Maidment witnessed the aftermath of the accident from the top of the opposite lane as he was returning to the Infant School after lunch, an account of the incident being found in his book 'I Remember'.
John Palmer

Mr Edward’s retirement in 1959 marked the end of an era, the following decade being one of uncertainty and change. This article, describing a supposed haunting,  gives a glimpse of school life before the advent of child centred education or Health and Safety restrictions!

For many years, boys and girls had been separated after leaving the Infant Department, girls moving to premises in Milford Street while boys remained in St. Martin’s Church Street. Both school buildings were old and had harrowing histories; one also overlooking a graveyard! Yet, neither was widely believed to be haunted, some staff members perhaps being more frightening than restless spirits!

In contrast, at the time the ghostly rumours started, the Shady Bower school was less than ten years old and sited on land of no known historic significance; the latter previously being used for sporting activities and community events. Nevertheless, there were contributory factors, one of which was the design of the school.

In the 1950s, the entrance at the front of the school was used by staff and visitors, the vestibule beyond resembling the foyer of a grand hotel with formal flower arrangements on polished tables. Children rarely had access to this hallowed space and, often, once lessons began, the surrounding area was also deserted. For this reason, the rumour that someone had seen a ghost in the upper corridor seemed credible, particularly as the latter was darker and colder than other parts of the school!

The rumours gained momentum when girls, using the cloakroom toilets, sometimes found unoccupied cubicles locked. Looking back, it is obvious that the culprit was an agile prankster, capable of climbing over the partitions but, in the 1950s, such behaviour was rare. Similarly, pupils were more inclined to believe that the ghost had opened the door to the cleaners’ cupboard than settle for a more rational explanation; this door usually being kept closed during the day! In fact, the prankster, or pranksters, may have instigated the actual rumours without realising what effect these would have on their more naïve peers; the timing perhaps being relevant.

Since the school opened, the headmaster, Samuel Edwards, had been omnipresent and, although no longer the ogre feared by Arthur Maidment, only the foolish would deliberately incur his wrath! After September 1958, however, Mr. Edward’s health declined and he was absent for long periods, eventually retiring at the end of the academic year. With an experienced staff, the school continued to function as normal but there was more opportunity for mischief in unsupervised areas,  the adage, ‘While the cat’s away, the mice will play’, becoming applicable.

The rumours particularly unnerved some of the pupils who washed up the teachers’ cups and saucers at the end of the afternoon break, the pairs on the rota being allowed to use the large sink in the kitchen after the catering staff had left. Therefore, they often found themselves alone in the largest part of the school, the ‘haunted’ corridor being straight ahead when they returned to class!

When talking with former pupils, it is evident that the rumours were not widespread but shared with close acquaintances; a personal link sometimes being added. From these, emerged a claim that the child had seen the ghost of a workman, this ‘fact’ suggesting that the rumours may have had a less ethereal origin!

The school caretaker was responsible for the general maintenance of the buildings and grounds but, occasionally, it was necessary to summon someone with specialist expertise. As, at that time, visitors did not have to wear identity badges and children were seldom warned of their presence, a chance encounter with a workman would have startled a pupil; the individual perhaps wearing white overalls and seen at a distance. Yet, it is also possible, that the mysterious visitor could have been an intruder, security in the school being almost non-existent.

Although parents usually told their children to be wary of strangers, they believed them to be safe in their own tightly knit communities; the traffic in some roads being regarded as a greater danger. To a certain extent, these views were shared by the school staff, older children sometimes being allowed to leave the premises to fetch forgotten items from home or run an errand for a teacher. In both the Infant School and the Junior School, there were unlocked access points and large areas where a person could wander undetected; a lone child in one of these being vulnerable.

A Figment of Someone’s Imagination?

Had St. Martin’s ghost been an elaborate prank, the perpetrators would have needed to be convincing as well as creative and cunning. Yes, there were several mischievous pupils capable of such a ruse but whether they would have been believed is debatable; it being more likely that fiction inadvertently became fact.

In the late 1950s, those involved in film production and broadcasting were less inclined to flout censorship and watershed regulations, younger audiences being protected from the horrific and terrifying. There were, however, some  innocuous films and programmes that featured ghostly themes; the latter also being found in the books, magazines and comics that older children read. As pupils often recounted these stories, or made up their own, it is not inconceivable that the ghost was merely a figment of an accomplished storyteller’s imagination; the original version of events perhaps being embellished in retelling!

If the rumours had no rational foundation, a more unworldly explanation has to be considered; the description of a ghostly workman being strangely in keeping with the site’s past.  For, although the land on which the school stood had no known historical significance, it was bordered by railway lines and Milford Goods Station; hazardous places where fatal accidents could have occurred during their construction, maintenance or operation. Also, the extensive grounds sloped down to Tollgate Road where a young station worker, Arthur Charlton, was tragically killed in the spring of 1922; the aftermath being witnessed by three Infant School pupils, including Arthur Maidment. The latter’s account in I Remember is particularly poignant as Arthur Charlton had left the boys’ school the previous Easter and ‘was the only son of elderly parents; his father being a disabled clockmaker who was often unable to work’ (page 30).

Therefore, if the ghost actually existed it could have been that of Arthur Charlton; particularly as he had once been a St. Martin’s pupil and only a few years older than those about to leave! However, even if there was no restless spirit, pupils were often aware of accidents that had happened in the vicinity and possibly based their own stories on them; my parents using the fate of the Levers’ son to deter any spontaneous dash into the road!

Finally, our school  lives were so governed by discipline and routine that we wanted to believe the rumours; the secrecy adding the lacking excitement! Perhaps this is the reason that they gradually petered out when we became involved in other activities and, to my knowledge, never resurfaced!

Like most pupils, I lived in an old house in which someone had died but never minded being left alone in the building or playing in the room in which my grandmother drew her last breath. Yet, I can still recall the terror I felt when, emerging from the cloakroom, I found the door of the cleaner’s cupboard wide open!

After this experience, I became increasingly nervous about being in the upper part of the school but was reluctant to tell my parents, other children also being similarly reticent because of possible ridicule. Almost certainly, no one would have been brave enough to approach a teacher although adult involvement may have put a swift end to the rumours and protected us from potential harm had the ‘ghost’ been an intruder!