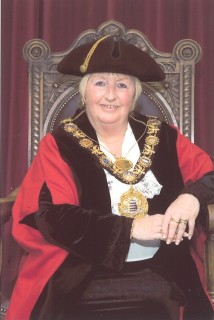 Iris took after her Grandfather and started work with a paper round when she was thirteen, getting up at six o’clock.  Her Grandmother would have a cup of coffee and some biscuits ready for her before she went out.

Iris wanted to be a hairdresser but in those days, “…you had to pay fifty pounds” to buy an apprenticeship and there wasn’t enough money in the family for that.  Instead she did shorthand and typing at evening class at the College that was, in those days, in Elm Grove Road.

Her first job was at Wessex Aircraft and Engineering at High Post and then UKLF, were she stayed until she had her first baby and she and her husband were posted to Germany.

When she came back to Salisbury, she decided she wanted to do something a bit different and applied to the hospital to do nursing.  She started in the General Infirmary in Fisherton Street and then moved on to Odstock where night nursing fitted better with her family commitments.   In 1977, Iris became the warden of the new Crane Lodge sheltered housing.  She had three happy years there but yearned to go back to nursing and moved to the rehabilitation unit at Odstock.  After a while, the working hours were changed and Iris asked to be transferred back to the Infirmary to Queensbury Ward, an acute medical ward, but a bad back forced her to stop work.

Iris’s political life started in the early Seventies when she moved to the Friary.  She instigated a petition to the Council, signed by other residents, asking for an outdoor drying area.  Then she organised a rota system, sharing the cleaning of the stairs and the outside areas so that they were always kept tidy.  The drying room in the flats was now hardly used so the residents asked the Council if it could be used as a community room. A playgroup, discos, bingo and fundraisers were organised by the Group.  While she lived in the Friary, Iris was Secretary to the Group.  It lasted until 2008 when it folded.

After working as a warden and then returning to nursing, Iris moved to Bemerton Heath and became a member of the new Tenants Panel.  This gave Iris the opportunity to bring pressure onto the Council to improve the neglected houses in Rambridge Crescent.  Central heating and new kitchens were installed and the retiring councillor for the area nominated Iris to stand in the next elections.  She was subsequently re-elected three times and was also the 748th Mayor of Salisbury.  Sadly, she lost her husband halfway through the mayoral year.   She says she never thought that the daughter and grand-daughter of men who sold newspapers on the streets of Salisbury would become the Mayor of the City.