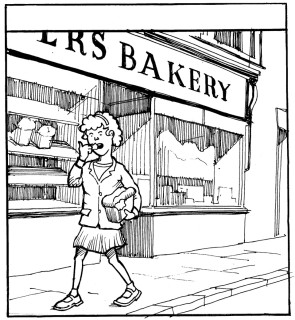 Iris used to sneak a bite from each of the four corners of her Grandfather's loaf!
Copyright Fred Fieber. 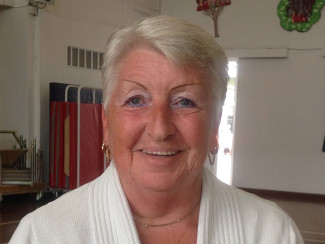 The house that Iris lived in with her Grandparents was a two-up two-down with a back scullery where there was a boiler.  A fire was lit on wash day which was a long day starting at 4am.  “………it went on the line by the time it had been boiled, washed, starched, blue-ed, put through the mangle…”

There was no electricity in the house when she was very young,  “we had gas mantles downstairs, and we had to take a candle up when you went to bed.”

The house in Greencroft Street had no carpets, just the occasional rug on the lino.  Every year fabric was bought for new curtains and a little extra bought to make Iris a sundress for the summer.  Tulips or apple blossom prints, she always matched the house!!

Iris’s Grandparents had been married for sixty years before their landlord put a bathroom in the house.  It was upstairs, but they had to walk through a bedroom to get to it which was difficult when someone wanted to go to the loo in the night.  Even so, to them it was luxury.  “Before then our toilet was outside, and we had to share with the next door neighbour for quite a few years. But when the government brought in that every home should have its own toilet, ours was put in the garden.”  They kept a small oil stove inside in the winter to stop the pipes freezing.

After the War there was rationing and Iris was sent to Foster’s Bakery at the corner of Milford Street every morning at 7.30 for the bread for her Grandfather’s breakfast. She would eat the four corners of the loaf before she got home.  Foster’s also delivered. She remembers the Baker was called Bert.  “… a van with some sort of motor on…he had to operate it with his hand and pull it along. And then the brake would go on when he wanted to serve the customers.”

Listen to a clip of Iris describing her house, on the right of this page.