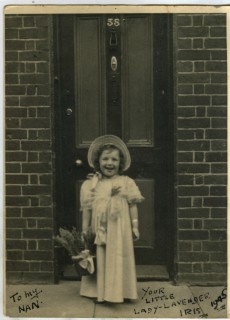 Marie “Iris” was born on 27th April 1942 at 58 Greencroft Street, the home of her Grandparents.

The night Iris was born, a fire bomb had been dropped on Salisbury Timber Company.  So while Iris’s mother was giving birth upstairs in Greencroft Street, the Home Guard were running in and out of the house with buckets of water to throw on the fire. You can listen to Iris telling the story in the audio clip on this page.

Iris moved with her mother and father to Park Street for a while but when their marriage broke up she moved with her dad back to her maternal Grandparents in Greencroft Street.

From the time she was four, Iris went every Sunday night with her Grandfather to the Salvation Army.  He was deaf so they had to sit in the front row.  She was asked if she would like to join the Sunday school and she went morning and afternoon and eventually joined the Singing Company and on to the Songsters.  There was a youth club and visits to other youth clubs and always something to do. “So therefore there was always something on for the kids then…. I think the most I can remember doing is ringing somebody’s doorbell or knocking a knocker”   She later became a Sunday school teacher.

There was very little traffic in those days so Iris and her friends played in the streets or on the Greencroft.  They played rounders and cricket and other invented games. She doesn’t remember any arguments between the children.

From the age of about eleven Iris remembers being able to cycle anywhere.  Because there was no dual carriageway and very little traffic, children could cycle out to Alderbury.  Or they would go for a picnic in Laverstock.

Iris remembers the Greencroft as a big open space with no dual carriageway, just the main London Road along the edge with seats overlooking the road.  She and her Grandfather used to sit on the seats and watch the world go by.   She remembers an air-raid shelter that was eventually demolished leaving a concrete slab that was useful for rounders.