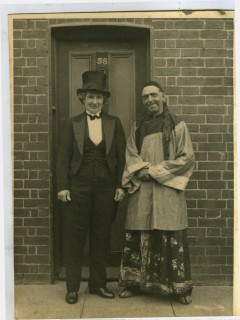 Iris’ Grandfather Fred Beavis, who was born in Salisbury, sold newspapers on the streets.  He always wore a Homburg hat and in the winter he wore a long black coat with a silk muffler.  People called him Lord Beavis because he always looked immaculate and wore spats. He was a member of the British Legion and served on all the committees.  He was very political and when the Conservatives won a general election he could be seen marching with a tambourine to the White Hart for the celebrations.

Iris’s Grandmother Maude Beavis, who was born in Woodford, was one of ten children.  When she was nine years old she went into service where she learnt to sew and clean, so the little house in Greencroft Street was always “bright and shiny”.  Maude was a good needlewoman and did embroidery and made dolls’ clothes for the children.  She also made clothes and knitwear for the family.   Iris had an aunt who lived in Culver Street who was a tailoress, sewing for “the gentry”.

When they were first married Iris’s Grandfather was in the army stationed at Tidworth.  Maude worked in the Steam Laundry.  Their first baby was born but died of consumption at fourteen days old.  Grandad was kicked in the face by a horse while on parade, leaving him permanently deaf.  While he was poorly, a telegram came asking Maude to go to the hospital because he was badly hurt but she sent a telegram back saying her new son was dying and she couldn’t leave him.

Iris’s grandfather and father sold race cards at Salisbury Races and with the money the family would go on the train past the fifteen stops to Bournemouth for the day. She would be treated to a new pair of plimsolls, a meal in the cafe and then down onto the beach.  Then back on the seven o’clock train.  It was always sunny in those summer days!  This was the extent of the summer holiday for a lot of people.  “We never had holidays that children are lucky enough to have today, with their parents.”