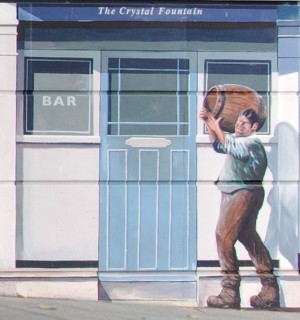 A more detailed view of Trunky the Barrel Snatcher outside the Crystal Fountain
Mural by Fred Fieber and Anthony Woodward, photo by John Palmer

‘Trunky’ came to light in the course of research into life in Guilder Lane during Eileen O’Leary’s time.

Writing in the Salisbury Journal in the 1960s an elderly lady recalled him from back in the early part of the century. Sadly, we don’t know his name, but he was apparently a short, very powerfully built man with a prominent nose. Hence his nickname, ‘Trunky’!
‘Trunky’s’ occupation was loading and unloading wagons – notably brewers’ drays – and he was highly adept at grabbing and manhandling kegs from the drays into the ‘Anchor and Hope’ (to name but one). Hence his full nickname – ‘Trunky the Barrel Snatcher’!
Sadly we don’t have a photo of him, but the children at St Martin’s were greatly taken with his story and he featured largely in their dance and movement presentations, and in their numerous drawings for the project.