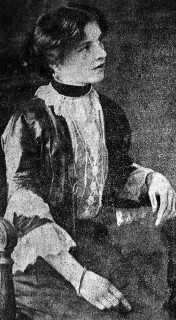 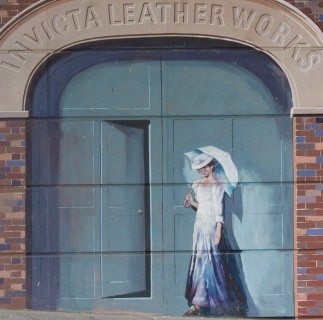 The entrance to the Invicta Leather Works as seen on the mural
Mural by Fred Fieber and Anthony Woodward, photo by John Palmer

Eileen O’Leary came to Salisbury, as a little girl aged 8, in 1901.  She lived at number 82 Winchester Street.
Eileen’s parents ran these premises as ‘The Winchester Cyclists’ Rest’, a combination of cafe, bed and breakfast, wash and brushup facilities and a bicycle repair service.  This caught the serious
‘passing trade’ in cyclists and other travellers entering and leaving Salisbury from the London Road via Winchester Street.
Eileen grew up in Salisbury, attending St Thomas’ school and Brown Street Baptist Sunday School.  She would have played in the Greencroft and may even be one of the little girls in our Greencroft photo, taken at this time.  She would also have played in Guilder Lane, which had forty nine children, aged four to twelve, during her time there!
When Eileen left school, she went to work in Lipton’s Grocery – now Boot’s Pharmacy.  Here she met and married Neil McNamee, who was the manager.  Eileen and Neil sailed for New York, when Neil got promotion in the Lipton organisation.  They both died on the ill-fated ‘Titanic’ when Eileen was just nineteen years old.  If you visit the Titanic museum in Southampton you can find her name in the list of those who lost their lives.
The photograph of Eileen was taken in Salisbury, to be left with her parents and young brother as a memento.  It is the only one so far known to have survived.  The portrait of Eileen in the mural, walking in front of the Invicta Leatherworks and based on the photo, was made by local Downton artist Anthony Woodward.
The colours for Eileen’s portrait were deduced by Anthony and a number of women involved in the musical ‘Daughter of Destiny’. The musical was written by Jeremy Moody and David Taylor
and told the story of Eileen’s life and death. Jeremy was himself brought up in Guilder Lane and the musical was performed in the Godolphin School theatre – so the Milford Connection remained!