You are here: Home>People>People in the murals>Characters in the Bridge Mural>Children playing in the street

Children playing in the street 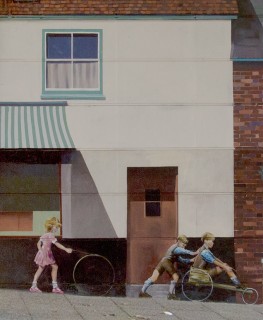 The scene in the Bridge Mural of children playing in the street
Mural by Fred Fieber and Anthony Woodward, photo by John Palmer

Many interviewees remembered their childhood street games.
Ronald Holloway (born on Rampart Road in 1922) remembers: “..hoops, you know, run along the street with a hoop.  A wooden one, well if you had a metal one then you know you were supreme you know…”.
As well as playing with hoops, children made their own trolleys: “I remember that we used to have little trolleys with four wheels on with string on the front wheels that you could steer it by and there was almost a competition to have the best trolley in the street and we would rush, rush around Greencroft Street and Salt Lane and St Edmund’s Church Street and back up Winchester Street and go right round this block to see who could go round the fastest… and we used to have really superb fun with those trolleys.“ (Michael Winterman)
When Rita Jacob (born 1948) was a child, Rampart Road was already so busy that she wasn’t allowed to play in the street outside her house at number 16.  Rita was amazed when she met friends later at school who were allowed to play outside!