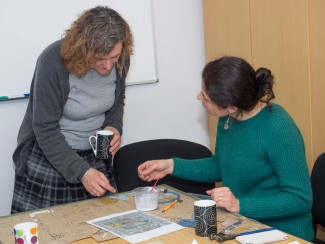 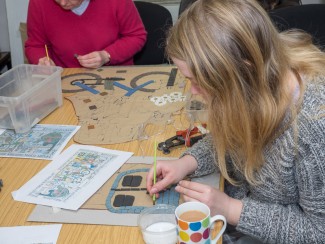 A workshop early on in the making process. Look at that concentration!
Photo John Palmer 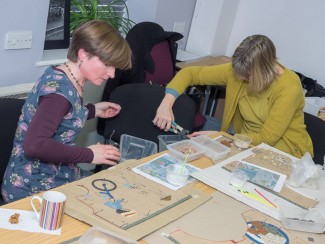 "Now where shall I put this tile?"
Photo John Palmer

The mosaic was made between January and March 2015 at a series of eight community workshops held at Denis House Community Hub on Endless Street in Salisbury, plus one “drop-in” session at Salisbury Arts Centre.

To enable lots of people to work on the mosaic, Joanna (the mosaic artist), cut the design into sections of paper which could be worked on individually and then joined up at the end. Tiles were glued onto the paper with the design back to front, so that Joanna could then flip them over and set them into flexible cement adhesive inside the bespoke metal tray (which holds the mosaic) once they were finished. The tiles were then grouted in, and the whole mosaic finished with a protective film.

The workshops were very jolly affairs, with lots of tea and cake helping the process. They also enabled people to learn things about the history of Winchester Street and of course to gain mosaic skills. Here are just a few of the comments about the workshops:

“Really enjoyed being part of something that will become part of Salisbury”.

“I learned a great deal about some of the stories and characters of Winchester Street at the beginning of the last century, and I guess some of the stories, such as the sheep being driven to market and the children playing in the road, are pretty timeless. I particularly liked the cycling connection given that there is still a cycle shop in Winchester Street, and the Titanic angle was fascinating.”

“I most enjoyed making something that will be seen in Salisbury for some years to come.”

“Knowing the history depicted in the mosaic has enhanced my knowledge and helps me feel more at home in Salisbury.”

“Really found the cutting and matching up of the mosaic pieces fascinating. Very compulsive.”