You are here: Home>About>Winners of the Alan Ball Award 2015

Winners of the Alan Ball Award 2015 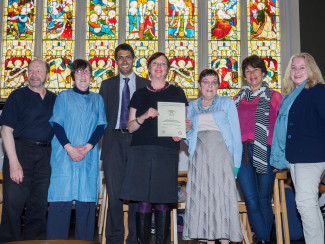 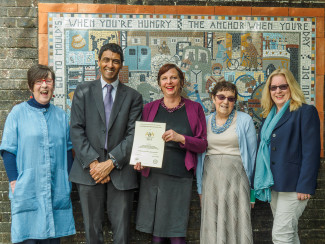 Members of the project team, with Terry Bracher of Wiltshire and Swindon History Centre
John Palmer

We are so pleased to receive another national award!

CILIP, the Chartered Institute for Library and Information Professionals, have given us the Alan Ball Award 2015 for local history e-publication.  Chair of judges, Terry Bracher, said “The judges were unanimous in their praise for the website, especially the breadth of content, the research it contains, its ease of use and the way the information is presented.”

We share this award with Buxton Museum, who were recognized for their set of apps. The judges had intended to make just one award for digital work, but the museum apps and our website were so different that they felt unable to choose one over the other and the award was split. Congratulations to Buxton Museum!

Terry Bracher, who is also head of archives and local studies at the Wiltshire and Swindon History Centre, came to Salisbury in May 2016 to present the website team with the award. After the presentation we took Terry to see the murals on Milford Street and the mosaic in Winchester Street. He was suitably impressed: “I’m delighted to come to Salisbury and meet the team behind this excellent website, and also to see the project in action. Their public art is not only striking, but hugely informative about the local history of this fascinating area. I hope the project goes from strength to strength.”

You can read more about CLIP and the award here: http://www.cilip.org.uk/local-studies-group/awards/alan-ball-awards/alan-ball-local-history-awards-2015-winners-submissions