You are here: Home>About>Community Archive and Heritage Group of the Year 2015

Community Archive and Heritage Group of the Year 2015 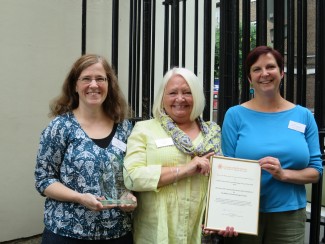 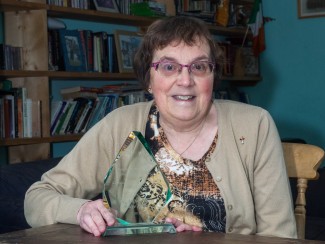 A ceremony was held in London at the CAHG Conference on 15th July 2015. Project Co-ordinator Clare Christopher and Project Archivist Emily Cooper collected the awards on behalf of the project. Clare also gave a fifteen minute presentation about the project, which was very well received. More details can be found on the CAHG website.

On 21st July 2015 a very jolly celebration and awards afternoon was held at Salisbury Arts Centre. We were delighted to welcome representatives from CAHG and the Archives and Records Association who presented us with our awards again so that everyone in Salisbury who had been involved with the project could join in! An audience of interviewees, volunteers, supporters, funders (including representatives from the Heritage Lottery Fund) and friends of the project enjoyed hearing from team members about the latest elements of the project. We were also treated to a movement piece based on shopping “then and now” by children from St Marks School and the Mind the Gap group from Salisbury Playhouse. We have lots of pictures from the Arts Centre celebration in this photo gallery

We felt it was fitting to ask Rita Jacob to be the custodian of the CAHG trophy. Rita has been involved with the project throughout both as a contributor and a volunteer. She has done a huge amount of work for the project, including on this website. She also has a very personal connection with the project. Rita says:

“On the 14th of July 1969, I left 16 Rampart Road early in the morning and walked into town as I had a holiday job in Marks and Spencer. At the end of the day, however, I returned home to a different number 16, the house in Rampart Road being one of those scheduled for demolition. After the move, I can recall walking down the lower part of the road only once before I became involved in the Milford Street Bridge Project.

On the day the project was launched at St. Martin’s, I stood with some old school friends opposite the site of my house and the past hit me like a brick, particularly the needless destruction of the community in which I lived for twenty-one years. For this reason, the project has an emotive and cathartic experience, an opportunity to talk about my childhood and the neighbourhood I knew so well. Moreover, being involved in various aspects of the project, I have learnt new skills and met lovely people, my house also living on in the mural! Long may it continue!”