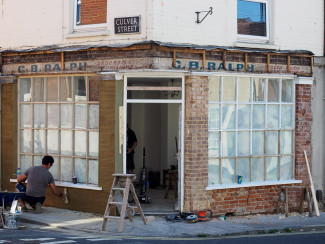 The shop on the corner of Milford and Culver Streets showing the older signs for "C.B. Ralph" uncovered during renovations in August 2016
John Palmer 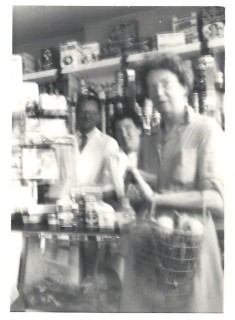 Inside the shop in the 1950s with Mr. Ralph and his shop assistant Brenda. Mr. Ralph's son David thinks the customer may have been Mrs. Izzard of Culver Street.
David Ralph 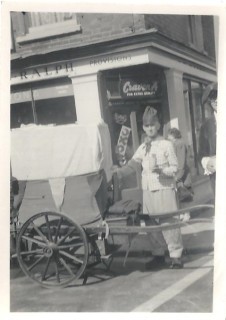 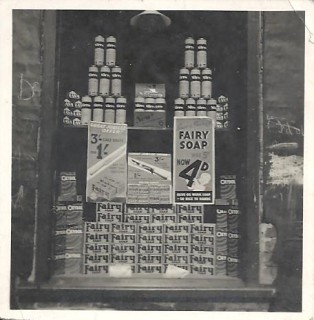 No. 68 Milford Street is on the corner of Culver Street, diagonally opposite the site of Foster’s the bakers. In recent years this was a bric-a-brac shop, previously Regency Tiles and before that Bob’s Tiles.  Between 1945 and 1967 it was home to C. B. Ralph’s groceries shop, run by Charles Ralph.

The shop was renovated during the summer of 2016 and the work revealed the old signs for Ralph’s the grocers.  Our friends at the Fisherton History Society Facebook group put up a photo which attracted many comments from people who remembered using the shop.

Jeremy “Frogg” Moody lived in Guilder Lane as a child, and recalled:

“This has taken me right back to my childhood! We lived in Guilder Lane and did a lot of our shopping from Mr. Ralph – I remember him as a kind man.”

Life at the shop

Mr. Ralph’s son David remembers living at the shop, and getting bread from Foster’s:

” My father leased the premises from 1945 (from his previous shop in East Street) until about 1967 from property developers the Bevis family.   Most of his customers were rehoused to Bemerton Heath when Culver Street and Rampart Road were ‘redeveloped’!    He then operated a delivery service but closed the shop soon after the arrival of supermarkets, and then worked for Robert Stokes for a short while before retiring to Bournemouth.”

” We lived on the premises until about 1958 and I used to do deliveries after school and at weekends to local customers on my father’s trade bike!”

Plans for the Ring Road

During early planning for the Ring Road and flyover, a lot more people were told that they would lose their homes than actually did. Frogg Moody again:

“When they built that monstrosity of a flyover, they ‘moved on’ Mr. Ralph and he never recovered from losing his business … They also tried to ‘Move on’ my dad saying our house was down to be demolished – we refused to move and the planners were so far out with their measurements that we actually gained a garden (and Mr. Ralph didn’t need to be moved out either….) The damage they did to people’s lives can never be underestimated (including that ‘road to nowhere’ which was an utter disgrace and a total waste of taxpayers money).”

“I am almost certain that the Ralph sign was painted by my dad who painted most of the shop fronts in the area including Grants fish and chip shop, Mrs. Tophams and the Abbey Stores.”

David Ralph has very kindly sent us a wonderful selection of his photos of life in Milford Street from the 1950s and 60s. We are working on a new page so that we can do them justice and will include the link here when it is ready.