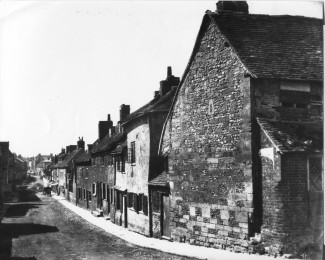 A view looking down Winchester Street towards the City centre. It is unclear when the photo was taken.
With kind permission of Salisbury and South Wiltshire Museum © Salisbury Museum 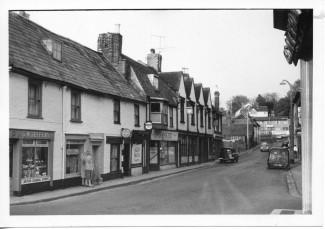 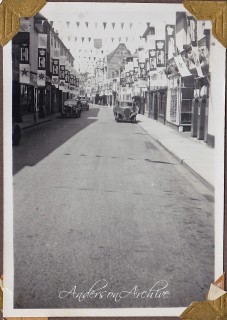 Winchester Street, now dominated by hairdressers, beauty shops and one-off design businesses, was a very different place at the beginning of the last century.  Before the building of the ring road it was one of the main routes into Salisbury, and provided numerous services for travellers.  During the 18th century the number of stagecoaches running between London and Salisbury rose to 52 per week; not surprisingly, the number of inns to accommodate these travellers increased too.  In Winchester Street the Black Horse inn on the corner of Brown Street was one of the principal inns of Salisbury.  From the mid nineteenth century this traffic began to decline and the inns did likewise.

The era of the bicycle

The Winchester Street entrepreneurs were ever adaptable, however, and ready for the arrival of the bicycle and the automobile.  At the beginning of the 20th century there were several outlets catering for the cyclists who came touring at weekends: Charles Langford’s shop lasted until the 1950s, and there was also Lowther’s and Ashridge cycle engineers.  The O’Learys at number 82, parents of the Titanic victim Eileen whose story is told elsewhere on this website, ran a refreshment stop for cyclists at their house at the top of the street where it met the London Road.  Even the Anchor and Hope pub boasted of the ‘special attention given to cyclists’!

The rise of the motor car

As the century advanced, the shops that had met the needs of horse-drawn traffic began to adapt to the motor car.  Harris and Son, originally carriage painters, became motor engineers as well.  Goddard, Saddler and Harness Maker at no 26, became Goddard’s Ford Service Station at number 35.  This would later move to Milford St and ultimately to Churchfields Industrial Estate to become Goddard Fiat.  For a small street, Winchester St had a lot of garages, including Redheads, Turners, and the General Motor Factors as well as those already mentioned.  There were also substantial small businesses such as Bentlif’s Brush Manufactury, and Pinder’s Ironmongers at the bottom of the street, which lasted until late in the twentieth century.

It wasn’t just the businesses that made money out of the passing motorists. Ken Edwards recalls:
“Bank holidays, in the latter days, and when I say the latter days, even in the sixties, when people started to get cars and that, it was always solid all the way from the market, all the way up Winchester Street, all the way along London Road and some ladies along there used to make tea and take it out and sell tea ’cause that’s how long they were stuck.”

What about the residents?

Winchester Street didn’t just cater for those passing through; it also had many residents whose needs had to be met. Ken Edwards remembers the grocer’s shop:
“And just down Winchester Street a little bit, well where Newmans are now, was Mrs Topham, which, a little shop which sold everything you just wanted, any, day and night if you wanted it you went down Mrs Topham’s and bought your Brooke Bond tea, your sugar, your flour, your jelly, your anything, she sold anything in that little shop and I think she kept going quite, until I say recently, you know the sort of seventies, eighties I suppose.  Ah, it was fascinating it was one of these places, just crowded with stuff, very narrow, I remember it was quite a high counter, ’cause I was young I suppose, where she used to keep all the sweets, but everything else was just everywhere, but you just had to ask her and she knew where it was.  Topham’s, everybody used to go to Tophams for that, anything you wanted you went to Tophams.”

Thanks to Katharine Lay for researching and writing a lot of this information.

Our Memory Walk goes down Winchester Street and has a lot of fascinating information.