The First World War : Recruitment and the Arrival of Colonial Troops 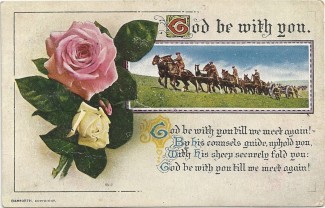 This is a typical example of the religious and patriotic postcards sent to soldiers in the First World War. However, conditions on the battlefields of France and Belgium were very different from the pastoral scene on the front!
Postcard from the Jacob family's collection 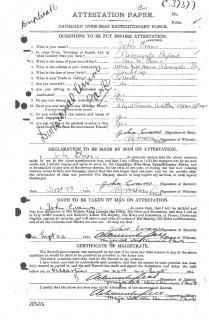 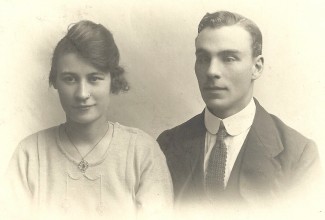 Unlike her sister, Violet, who went to Queensland with her Australian husband, Dorothy Tryhorn did not want to leave her family for a strange country. Therefore, John Evans never returned to Canada after the First World War.
Picture by kind permission of the Jacob family

As soon as war was declared on 4 August, there was a rush to join the army; one of the new recruits being Herbert Bundy who had given up the tenancy of The London Road Inn in order to enlist. A photograph taken in September 1914 shows him standing in a group about to board a train; this including plasterers, plumbers and postmen. Some of these ‘brave lads’ would never come home; perhaps joining the thousands with ‘no known grave’ except the place where they fell.

Another First World War photograph shows Minster Street and the Cheese Market decorated with bunting and banners; the London City and Midland Bank acting as a recruiting office. Many of those who passed through these doors and those of other local recruiting offices enlisted in the Wiltshire Regiment; the Masseys of Rampart Road having four sons serving in the 1st, 2nd and 4th battalions. Some, however, were underage when enlisting or too young to serve abroad; William Fry, who lived in Paynes Hill, being only seventeen when he was killed in at Gallipoli in August 1915.

Three of the Massey brothers and Sidney Pitman had been members of St. Martin’s Church Lads Brigade. They all enlisted in the local regiment but, by September 1914, the Church Lads had their own brigade formed on an estate near Denham by the local squire. ‘Lads’ arrived from all over Great Britain to join this brigade; the latter later becoming the 16th Battalion Kings Royal Rifles Corps. It is not known, however, whether any of St. Martin’s Church Lads joined the brigade; this taking some recruits who were rejected elsewhere.

The new recruits were soon joined by troops from all parts of the British Empire, Canada assembling an Expeditionary Force of over 30,000 men within seven weeks of war being declared. This force was transported to Britain, where they spent four dismal months on a cold, wet Salisbury Plain; other colonial troops also being encamped around the city. At some point during the war, some were billeted with local families; this having a romantic outcome in the case of the Tryhorn family who welcomed an Australian and a Canadian into their St. Edmund‘s Street home. Their eldest daughter, Violet, married the Australian soldier who came from Queensland while her younger sister, Dorothy, became the wife of John Homersham Evans, a Canadian immigrant born in London. John did not return home to his adopted country when the war ended but settled with Dorothy in Ivy Place; working at Southern Command during the Second World War after several moves and jobs.