The creation of the Jubilee Mural 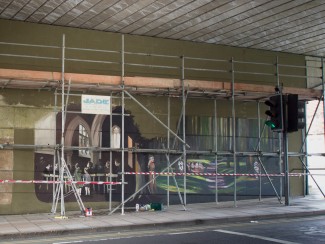 The Jubilee Mural scenes in St. Edmund's Church and the gardens are taking shape
John Palmer 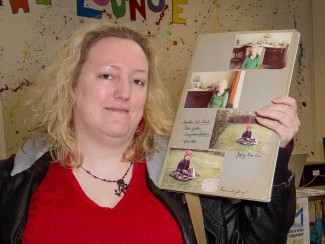 Memories of Queen's Silver Jubilee in 1977

Once the first mural was complete, the opposite blank wall looked even worse and we received many enquiries asking when we were going to add another mural.  Clare Christopher (project co-ordinator) and Fred Fieber (principal mural artist) discussed it and wondered what they could do.

As luck would have it, Salisbury City Council were looking for a way to commemorate the Diamond Jubilee of Her Majesty Queen Elizabeth II in 2012.  Clare approached them with a proposal to add a second mural showing Salisbury’s royal celebrations and the council agreed to fund it.

In April 2012 we held a “memory day” at Salisbury Library.  This was an opportunity for people to tell us about Royal celebrations in Salisbury, and to bring along photos and objects of interest.  We were delighted to hear about all sorts of community events, and also to get such a lot of positivity about the new mural.  This gave Fred enough material to design the mural, which was painted during the summer of 2012.

We had so much good material that we couldn’t include it all in the mural.  We decided to feature events in living memory, so that we would have recorded personal stories about each section.  Fred and his assistant Anthony Woodward started painting the mural in July.  The mural uses specialist mural paint and is protected with an anti-graffiti coating.  The whole thing took 8 weeks to finish.  We have a gallery of photos of the mural while it was being painted.

The official opening and celebrations

The mural was officially opened on 5th. October 2012 by the Mayor of Salisbury, John Collier.  It was followed by a celebration at Salisbury Guildhall, with pupils from local schools and several of the people  who were in the original photos that Fred and Anthony used in the design.  We have a gallery of photos of the Guildhall celebration, and some of people who were in the original photos together with their portraits in the mural.

There is plenty more about the events depicted in the Mural in the “Events” section of the site. As a taster, the soundclip on the right give Francesca Stout’s memories of the Queen’s Silver Jubilee in 1977.