You are here: Home>Events>World War II>Phyllis Maple : The War Years 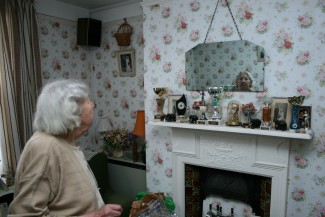 When their son was nine months old, Phyllis and Reginald Maples moved into a house in Guilder Lane. This was owned by the Municipal Charities; it being necessary to collect references and appear before a board. Phyllis was still living there at the time this photograph was taken for the Milford Street Bridge Project.
Photo by Anna Tooth

Phyllis’s husband, Reginald Maple, had volunteered to go into the navy as soon as war was declared; leaving for Portsmouth in the spring of 1940. After spending some time in Bermuda, he was assigned to HMS Ramilles, a ship that believed to be lucky because it had been blessed by a Maori chief. Reginald was on leave at the time of his wedding in October 1941 but, if necessary, could be recalled to his ship at any time.

During the first years of their marriage, Reginald and Phyllis were often apart for twelve months at a time; being away when his first child was born in April 1944. He returned unexpectedly when Bob was about three months old and Phyllis was visiting friends:

At the beginning of the war Phyllis was still working at Woolworths; becoming an air raid warden and fire watching on the roof of the Silver Street building. When ‘called up’ she did not join any of the women’s services as Percy thought it unlikely that their leaves would coincide; instead opting for munition training in Gloucester with two other Woolworth girls. While there, she sheltered in the cellar of her lodgings as bombs fell on Coventry:

‘When we were up there do y’ know we heard, all the bombs that were dropped, in Coventry, we heard all those bombs we went down in the underground cellars an’ you heard the ground all shook where all these bombs were dropped up there, but I didn’t dislike it because the countryside was lovely all up through the Cotswolds’

Phyllis returned to Salisbury when Reginald’s parents became ill; then being sent to work in Wellworthy’s factory in Harnham. Here. piston rings were made for aircraft, Phyllis remembering the long hours and the dust:

‘We started all the machines going all across the shop floor was all dust n’ we hadn’t got any dust extractors then n’ so we were allowed to have a half pint bottle of milk a day to counteract, all this dust’

She found the night shifts particularly difficult as army convoys passing along Rampart Road disturbed sleep during the day; often reporting for work half asleep. There was only a forty five minute break at midnight and, as there was no canteen, the women brought their own food and entertained themselves:

‘At midnight, we used to turn it all off … everything shut down n’ you had a break, I know we had a three quarters of an hour, an’ then we’d play an old gramophone n’ then we’d went dancin’  [laughs] for just for the break time, an’ then we were back on’

In the latter part of 1943, Phyllis was pregnant and unable to cope with the seventy two hour weeks; leaving Wellworthy’s in November. At that time, she and Reginald were living with a widow in Rampart Road at Number 32; taking rooms in order to avoid upsetting either set of parents:

When her son was nine months old, however, they moved to a house in Guilder Lane, a property owned by the Municipal Charities. This was to be her home for almost the rest of her life, Phyllis moving into a nursing home shortly before her death in April 2014.