You are here: Home>Events>Market Day: the animals come to town! 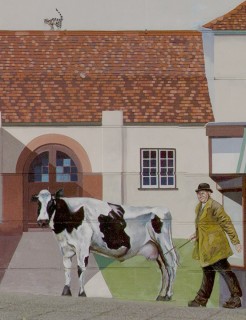 Percy 'Porky' Andrews lived with his parents in one of the houses near Percy Churchfield's Dairy. On market days, he drove cattle between the market and Milford station, dressed in a long brown coat and flapping gum boots. The cow in the this mural picture looks placid, as does the one standing in Fosters Bakery, but often the animals broke into a gallop with Percy hollering and swinging his cane behind them!
Mural by Fred Fieber and Anthony Woodward, photo by John Palmer

Percy Andrew's the 'cow-walloper', drove the cattle from Milford Goods Yard to the Market. Some cattle invariably escaped, some of our interviewees remember them crashing into Foster's Bakery in Milford Street - as depicted on our Mural.
Photo by John Palmer

Just along from Milford Street, on what was then the Southampton Road (now Tollgate Road) stood the Milford Goods’ Station, with the Dusthole or Railway Tavern opposite.  Opened in 1847, Milford Station was Salisbury’s first railway station. It closed to passenger traffic in 1859 and continued as a goods-only station until it was closed in 1967.  Many of the project interviewees remember livestock being driven from the Market Place to the station.

Frances Turner remembers how as a child when the cattle were coming up the Street she “used to scoot indoors”.

“After the market they used to drive all these cattle back across the Market Square, across the Guildhall Square and up Milford Street right up under where the archway is now of Milford Street, and the very project that we’re talking about and along Rampart Road and up St Ann’s Street into the Milford Goods’ Yard and the cattle and sheep used to go back on the trains and go away.  And I remember as a small boy being in Foster’s Bakery, in the front shop and all these cattle were all coming up the street and people were in the shop cowering and the door opened and this huge cow came rushing into the shop and everybody was squealing and diving for cover behind the counter and the doughnuts were all over the place, and there was absolute pandemonium and this huge man came in and grabbed hold of .. this cow and bashed it and it shot off out again and up the Street they went”.

The images on this page show a cow being driven up Milford Street to the Goods Yard by Percy Andrews the drover, or “cow walloper”,  and one renegade animal breaking into Fosters Bakery. Both images are in the mural.

“it wasn’t difficult to follow the trail of the cattle from the market up to the station. But when I was on the railway I was told that the job of labelling the cattle trucks was always given to one of the newest members of staff for obvious reasons”.

“The cows and sheep used to be driven up Milford Street to get to Milford Goods Station, and it was nothing to see a herd of cows careering up Milford Street.  I used to hate Tuesdays, hate it. Even when I went to work I hated it, going down Milford Street, because you never knew when you’d meet a bull with a ring through its nose and a man holding him by a rope. A very flimsy looking rope. And silly sheep that would go everywhere, and cows that looked as if they were going to stampede any second. It was like the wild west really”. (Jean Moroney)

Read some more memories of the Market, by Ken Edwards, here